Participating in a world congress on Faith-Reason-Dialogue

Two members of the Teresian Association, Eulalie Barsanas and Nenita Tenefrancia participated and presented papers in the last World Congress of Philosophy of the International Federation of Catholic Universities recently held in Manila. 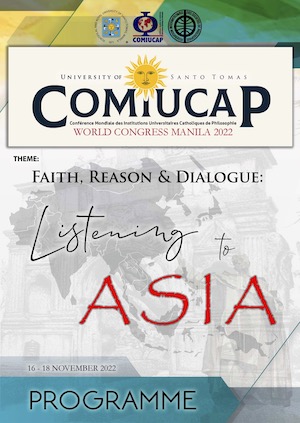 For three days last November 16-18, 2022, the University of Santo Tomas (UST) in Manila, Philippines, the oldest existing university in Asia, hosted the Sixth World Congress of Philosophy of the International Federation of Catholic Universities (COMIUCAP).

The event held in a hybrid format, was attended by scholars, students and professors of Philosophy and Theology, priests, seminarians, religious, and lay people. The overarching theme of the Congress was “Faith, Reason, Dialogue: Listening to Asia.”

Among the many varied and rich presentations, attention was called to the 500th Jubilee year of Christianity in the Philippines, theologizing in the Asian context, the role of philosophy in the theological self-understanding of the Church as a community of disciples of Jesus in the world, Catholic higher education in the Philippines, the current status of the dialogue Faith and Science, articulation of Faith and Reason, and dialogical attitudes in cultures and religions, etc. 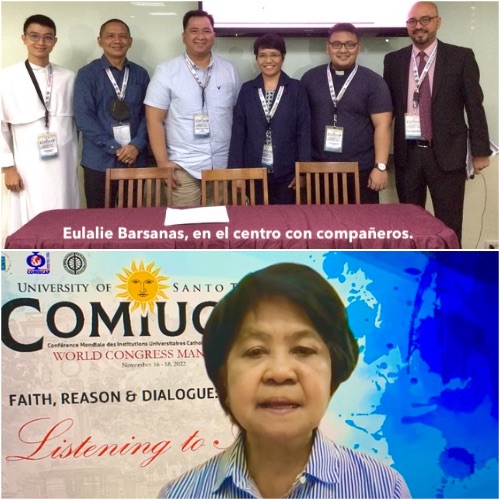 Eulalie Barsanas and Nenita Tenefrancia registered both as participants and paper presenters during the Parallel Session event. Eulalie, currently a student of Master of Arts in Theology at UST, will defend her thesis this December. She presented onsite her paper entitled “An Analysis of the Integration of Interreligious Dialogue in the Theology Curriculum of San Isidro College: Towards a Theology of Interreligious Dialogue in Education”. According to her, interreligious dialogue is an essential component of Christian education, thereby necessitating its integration into the curriculum for forming the young in academic institutions.

Nenita on the other hand presented her paper “Dialogue of Faith and Science: An Imperative for Evangelization Today”, via video conferencing. Her paper centered on the idea that for evangelization, the approach to this question has to take us to the pragmatic and the vital. Human and cultural exigency demands that we integrate our Science, our Knowledge, our Culture, the totality of what makes up our Life, with our religious Faith.

The challenge lies in getting to know and understand better the content of our Faith, and getting to know and understand better this world in which we live. To illustrate this, Nenita took a case in point: St. Pedro Poveda and the Teresian Association, and developed this topic for the second half of the talk. She concluded with two sub-topics, namely the spirit or attitude of prayer and study as a powerful weapon for evangelization.